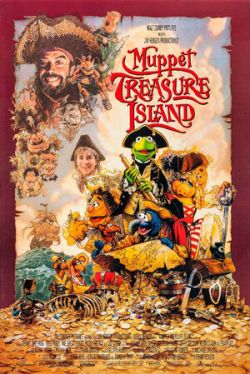 Jim Henson died in May 1990, on the verge of selling his famous Muppet characters to the Walt Disney Company. No one was quite sure what was going to happen next, although the Disney deal fell through without Henson as a part of it. When his son Brian Henson emerged as director of the outstanding children’s film The Muppet Christmas Carol in 1994, it seemed as if the Muppets were finally back on track: resurgent, popular, and in their best quality production since The Great Muppet Caper back in 1982. Disney may not have bought the company, but they did distribute the new film – and its commercial success led them to commission a sequel for two years’ later.

Muppet Treasure Island is not the creative success that The Muppet Christmas Carol was. That earlier film genuinely felt like lightning in a bottle; an inspired concept brought to life with a production team hot with something to prove to their audience. Treasure Island does not simply feel like just another sequel, it feels actively lazy. It picks another classic work of British literature, dresses it with puppets, and tries to turn it into a comedy. The thought and meticulous design that went into the earlier film feels absent in the latter. While not the worst Muppet feature ever committed to screen, it is arguably the weakest entry of the original six – all made before Disney finally purchased the characters part-and-parcel. Many mistakes were made.

While the idea of replaying historical novels with Muppets is, in itself, a potentially lucrative idea, it does not mean that simply any book can be easily adapted in such a fashion. The process, as successfully demonstrated by Christmas Carol, depends on an awful lot of hard work in not only successfully pairing the text to the Muppets but ensuring that the Muppets still work in support of that text. Despite the proliferation of skating penguins, rat accountants, and signing fruit, The Muppet Christmas Carol is for the most part a scrupulously faithful adaptation of Dicken’s original work. Stevenson’s Treasure Island, while a fine novel, does not lend itself to the Muppets anywhere near as well as A Christmas Carol did. It is an adventure novel, and when the narrative requires action scenes, chases, and particularly sword fights, the Muppets are simply not up to the task. The screenplay feels perfunctory, and lacks the delicate combination of supernatural horror and comedy that made A Christmas Carol such a success.

Another mistake: too many humans. The film is littered with them. They populate the streets of Portsmouth, the inn where protagonist Jim Hawkins (Kevin Bishop) works, and even the deck of the Hispaniola. Critically, a human plays Hawkins and a human (Tim Curry) plays the villain Long John Silver. This leads to something unprecedented and deeply ill-advised for a Muppet movie: scenes that do not feature the Muppet characters at all. It is a genuinely bizarre choice, demonstrating both the folly of casting a live actor as Silver and also the unsuitability of the novel to this kind of a film.

There is a way to successfully act against the Muppets; it is a method typified by both Michael Caine in The Muppet Christmas Carol and particularly by the masterful Charles Grodin in The Great Muppet Caper (1981). Guest performers in this film – notably Billy Connolly, Jennifer Saunders, and to a large extent Curry – over-act terribly. They play the jokes for laughs, and actually compete against the Muppet characters in terms of comedy. By doing so they eliminate the absurdity of the Muppets: sock puppets treated as real people. Grodin’s Nicky Halliday is funny because Grodin properly commits to a straight-faced love triangle with a pig and a frog. Similarly Michael Caine’s Ebenezer Scrooge excels from such elements as employing an office full of rats to do his accounting and shouting at rabbits in the street. In Muppet Treasure Island everyone is visibly treating events as something of a fun lark, and as a result a lesser film emerges.

The film also weirdly miscasts the Muppets as well. The Muppets work because they always behave to type. Miss Piggy (Frank Oz and Kevin Clash) is a vain and aggressive diva. Kermit (Steve Whitmire) is a constantly frustrated idealist. In Treasure Island Fozzie (Oz and Clash again) is cast as the foolish Squire Trelawney, but is then required to behave as a complete simpleton. In every other Muppet production Fozzie is a foolishly optimistic but harried stand-up comic. Here he is required to play a credulous idiot. Earlier, better Muppet productions would have invented a new character altogether.

One interesting facet of the film is Hans Zimmer’s robust and energetic musical score, which riffs knowingly on the pirate movie genre with a lightness of touch and good sense of self-awareness. Some years later it clearly came in handy when producer Jerry Bruckheimer asked Zimmer to replace Alan Silvestri’s score to Pirates of the Caribbean on short notice. More than a few elements from this earlier composition emerged there, giving Muppet Treasure Island an additional frisson that original was not there.

Franchise filmmaking inevitably leads to ups and downs in quality as a string of sequels emerge, however the drop in quality and effectiveness from one film to another is particularly obvious here. Made to a formula, and lacking in any vital sense of energy, Muppet Treasure Island is depressingly mediocre. Muppets from Space (1999) was not too much better. The characters continue – now as fully-owned properties of the Walt Disney Company – but the light has gone out. Creatively, this is where the Muppets started to die.