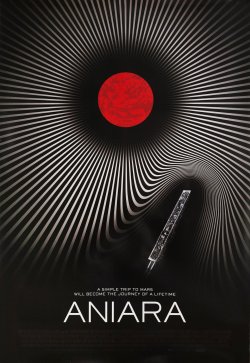 Who could have guessed that a Swedish science fiction film would turn out as bleak and troubled as every other genre of Swedish cinema? Pella Kågerman and Hugo Lilja’s 2018 film Aniara is based, on all things, on a 1956 novel in verse by Harry Martinson. I have not read Martinson’s book to judge Aniara as an adaptation. As a film in its own right it is troubling, dark, and thoughtful.

Aniara begins with an Earth that has been used up and ruined by human pollution. Aniara is a massive luxury spaceship, fitted out to move several thousand people to a new colony on Mars. Shortly into its three-week voyage the ship suffers a sudden collision with floating debris. The captain orders that the engine’s nuclear fuel rods be ejected to avoid an explosion. That explosion is, thankfully, avoided – but now Aniara has been knocked off course and there is no fuel left with which to correct its trajectory.

This nightmare scenario for space travel drives Aniara. The ship can recover its course by sling-shotting around the nearest celestial body, but that requires it to actually come close to such an object. Without a planet in our solar system for it to meet, the Aniara is destined to fly indefinitely toward interstellar space. This is not a tense thriller in which a team of heroes race against the time to prevent catastrophe. The catastrophe is over and done within the film’s first quarter-hour. Everything else is coping with the unimaginable.

All of this is seen through the eyes of the “Mimarobe” (Emelie Garbers), a technician who operates Mima; an artificially intelligent room that taps into human minds and inserts bespoke visions and dreams of calming natural landscapes. On a three-week transit from Earth to Mars it is little more than a novelty diversion. On an indefinite voyage into the depths of space, it is a psychological necessity. This soon leads to problems, since Mima is designed to draw on a few human minds a day in various states of unrest and anxiety and not several hundred in fits of panic, terror, and dread. The Mimarobe does her best to fight the inevitable, but the ship’s quietly desperate captain (Arvin Kananian) is relying on the Mima to keep the masses calm.

Aniara has an ambition that slightly exceeds its production budget. The ship itself, for example, is clearly cobbled together from real-world buildings, lecture theatres, and passageways. The story and themes overcome these limitations, however, and it is not difficult to become engrossed in the Aniara’s predicament and the fate of its passengers. Its visual effects – largely limited to exterior shots of the ship’s journey – are awe-inspiring. The screenplay, by the directors Lilja and Kågerman, is dominated by philosophical thought and human behaviour more than action and suspense. This is a smart, science fiction drama with a particularly literary sensibility.

Emilie Gerbers (credited here as Jonsson) dominates the film and makes for a fascinating protagonist. Here we get to see a character at her very best and worst, as well as a slow maturation and change in behaviour as hours and days turn to weeks and months. Bianca Cruzerio is also very strong as a pilot with whom the Mimarobe – who is never named – romances. There is much unsaid between them, and their relationship rings throughout with truth.

Aniara is a stunning work of science fiction that sidesteps obvious stereotypes and genre conventions, and delivers something that feels genuinely insightful – and in some scenes actively transcendent.

Aniara is available on bluray from Arrow Video in the UK, and is currently streaming on Stan in Australia.