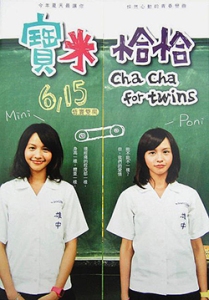 Mini and Poni (Huang Pei-Chia) are twin sisters enrolled in their senior year of high school. They’re both star players on the basketball team. When Mini begins to be pursued by one of the boys in their school, and then by a second who’s confused Mini for Poni, Poni begins to crave a life for herself outside of her sister’s shadow.

Cha Cha for Twins is a 2012 Taiwanese teen drama. It seems to get pitched mostly as a comedy, which I dispute: while there are plenty of laughs – okay, smiles – in the first half, it all gets rather melodramatic and serious by the end. It’s best thought of as drama with light-hearted moments, rather than as a full-blown laugh riot.

Huang Pei-Chia does a sensational job playing both Mini and Poni. She’s so good, in fact, that I was not aware while watching the film that one actor played both roles. The film is thus technically marvellous as well, since the incorporation of both sisters into so many scenes and shots is done brilliantly. More surprising is that this was apparently the acting debut for Huang, who had previously only worked as a fashion model.

The characters in the film are all well crafted and performed, and despite some of the more over-the-top emotional moments do come across as real and believable teenagers. Ouyang Lun is likeable as Yu-Kuo (nicknamed “Yoghurt”), the teenage boy who doggedly pursues Mini while maintaining a wonderful friendship with Poni. Paul Chiang is also great as Ping, a tall and awkward boy who is smitten by Poni – and then accidentally pursues Mini instead. If there’s a particular highlight among the cast it’s Winnie Chang as Ping’s older sister, who acts as his guardian since their parents’ deaths, and who operates the town’s local gambling den. Her oddly cool and detached gangster persona is the funniest part of the film.

The film compounds misunderstandings on top of one another as it goes, to the point where it takes about 20 minutes at the end to tease them all out. The film’s length is its biggest drawback. At 90 minutes it would have been a breezy and enjoyable movie. At 109 minutes it really drags in places, and loses any momentum that it would otherwise have gained from all of the romances and mix-ups.

It’s a directorial debut for Yang Yi-chien, who has teamed up with television director Jim Wang to make the film. Given the good qualities on display in both the direction and Yang’s semi-autobiographical screenplay (she is a twin herself), I was hoping this amiable diversion might lead to future films. Sadly her output since has been limited to one short film and a writing gig for a television serial. While imperfect, Cha Cha for Twins showed a lot of promise.

This review was originally published at The Angriest.