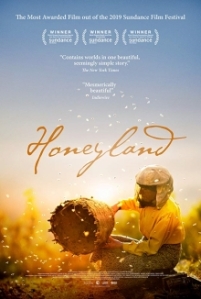 Hatidže Muratova lives with her elderly mother in an abandoned mountainside village in North Macedonia. Her house has no electricity or running water. Nobody lives for miles around. Hatidže makes a living keeping bees – she is one of the last of Macedonia’s wild beekeepers – and carefully tends to the local hives, selling their honey for 10 euros a jar in the capital Skopje. When nomadic rancher Hussein Sam arrives with his wife and seven children, Hatidže is keen to pass on her bee-keeping knowledge to a new generation – but the obstinate Sam has his own way of doing things, putting Hatidže’s entire livelihood at risk.

Honeyland, directed by filmmakers Tamara Kotevska and Ljubomir Stefanov, is a widely acclaimed and internationally successful documentary from North Macedonia. It was shot on location over three years, with a camera crew silently observing Muratova as she underwent her daily routine. No one narrates the documentary. The filmmakers carefully stay out of shot. Remarkably, not a single person on-screen ever glances down the camera lens or even acknowledges that they are being recorded. The end result is something more akin to a pared-down drama than a documentary. One wonders to what degree the observer effect has changed what has been captured on-screen. This may be real life, but it has more than a hint of performance about it. All of those hours of footage have been distilled down to a tight narrative as strong as most films you will likely see this year.

Part of the enormous appeal that Honeyland possesses comes from the remarkably beautiful manner in which it has been shot. Muratova’s home is effectively in ruins: there is no electricity to power film lights. Everything is shot in natural light. Cinematographers Fejmi Daut and Samir Ljuma have worked wonders with limited resources to capture the Macedonian wilderness in the most picturesque fashion, and transforming this into one of the best-looking documentaries of recent years. It is rich in both beauty and atmosphere. That beauty also extends to the musical score by Macedonian art-pop band Foltin, who immerse the visuals in a unique and appealing sounds and melodies. It is immediately clear why Honeyland had been such a runaway success: it is simply a very beautiful film to experience.

If there is a downturn to this attractive package,however, it is that it feels a little too slick. There is a slight sense of manufacture about it: the narrative is a little too clear and defined. The key emotional beats feel a little too conveniently captured and framed. All documentaries must undertake the task of constructing narrative out of reality, but Honeyland seems to have pushed the narrative angle just a little too far to find truth – what it does discover is hugely entertaining and involving for an audience, but regularly feels more like drama than document.

Hatidže Muratova makes for a great protagonist within that drama, mind. Level-headed, polite, and curiously upbeat, she lives her semi-solitary life with an infectious enthusiasm for her bees and their upkeep. Two for me two for you, she often remarks – or even sings – as she carefully extracts only enough honey to make a living from, leaving the other half of the honeycomb for the bees to continue using. It is a simple but arresting act of sustainability, one that affixes an ecological theme firmly to the film, and which is brought into sharp contrast when the Sam family arrives. Where Muratova preserves, Hussein Sam destroys and pillages. By comparison his large, unwieldy family is destructive. They do not take proper care of their herd of cows, leading to sickness, starvation, and death. They treat their various pets like objects – typified by off-putting shots of a toddler, Hussein’s second-youngest, casually dragging a kitten around by the neck. They clear entire hives of honeycomb at a time, despite Muratova’s desperate attempts to teach them sustainable practice. The film occasionally gets quite hard to watch due to all of the casual animal cruelty. The Sam family are visibly dirt-poor, but unlike Muratova they clearly crave something better. Desperation leads to cruelty, and ultimately misery. It seems particularly hard on one of Hussein’s sons, who is instinctively drawn to Muratova’s teachings while fighting bitterly against his father. One finishes the film desperately hoping he finds a clear path to his independence in the years to come.

Ultimately Honeyland works because it functions on multiple levels of theme and allegory. It is a warning about sustainability and a fragile environment. It is a celebration of tradition and Macedonian culture. It is a portrait of a fascinating and immensely likeable woman. More than anything it is a glimpse into part of the world we rarely see – away from technology and 21st century culture, away from privilege, and far beyond the lives that many of us in the developed world take for granted. Honeyland is a rare gem.