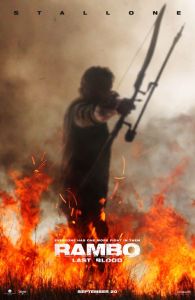 Vietnam veteran John Rambo (Sylvester Stallone) lives on his family ranch with Mexican housekeeper Maria (Adriana Bazzara) and her granddaughter Gabrielle (Yvette Monreal). When Gabrielle – a high school graduate on her way to college – receives details on her long-departed father, she crosses the border to Mexico to track him down. When she does not return, Rambo heads south himself to bring her home – with catastrophic results.

John Rambo was of course the protagonist of the novel First Blood, written by David Morrell. That was in turn adapted into the genuinely great film drama of the same name, directed by Ted Kotcheff and starring Sylvester Stallone. Hollywood being what it is, audiences received a deeply unnecessary sequel in 1985, and another in 1988, and then a third in 2008. It has been 11 years since the last effort – the only one directed by Stallone himself – and the character returns for his most unnecessary sequel yet.

Full disclosure: while the only Rambo film properly worth watching is the original, I have maintained a reasonable amount of pleasure over the years watching the ridiculous adventures of American exceptionalism as it travels the world from Vietnam to Afghanistan to Burma killing hordes of identical henchmen and morally corrupt soldiers with a ridiculously over-the-top array of guns and knives. They have been poster children for the entire concept of the ‘dumb action flick’, but have managed to carve a sort of undemanding niche through some decent action direction and some solid performances from Stallone, Richard Crenna (for the first two sequels at any rate), and a raft of one-off guest performers. Last Blood contains a similar assembly of quality actors working material that should be beneath them, including Paz Vega (Sex & Lucia) and Óscar Jaenada Gajo (The Man Who Killed Don Quixote), and it also contains Stallone’s powerful portrayal of a broken and unstable war veteran. The similarities to the previous four films pretty much end there.

There is something about Last Blood that is appallingly generic. A teenage girl gets kidnapped by criminals in Mexico, and a family member with a violent and dangerous past comes out of retirement to save her. It is essentially the cheap Mexican equivalent of Pierre Morel’s Taken (2008), only with John Rambo shoe-horned in and all of the energy and suspense squeezed out. It is also quite viscerally violent in places, in a manner that feels properly gratuitous – finally crossing a line that earlier installments had simply danced around. It also feels particularly racist this time around, something not seen since Rambo was given the opportunity to win the Vietnam War in Rambo: First Blood Part II. The fourth film, Rambo, certainly did a violent number on the Burmese military, but that was just a corrupt army. Here the whole of Mexico is painted Donald Trump-style as a run-down and hideous nest of drug-addled rapists and murderers. 20 years ago it would have made for a slightly odious but unremarkable watch. In 2019 it actively feels like pro-Trump propaganda. You could make a solid claim for the second and third films to be just as much inspired by Ronald Reagan’s presidency, but we are a smarter audience now. This time around we know better, and it really hamstrings any attempt on director Adrian Grunberg’s behalf to make us engage with this new adventure. This time around it really is quite a deeply ugly and unlikeable experience.

Even Stallone’s portrayal of the character feels ugly. Earlier films saw him deeply traumatized and irreparably damaged, but constantly looking for a sense of peace and justice. Here he is a creepy survivalist, building extensive networks of tunnels underneath his own property, hoarding military-grade weaponry, and shouting at teenagers that the world is an irredeemably cruel and heartless place. The original John Rambo of First Blood is a tragic and heartbreaking figure; the Rambo of Last Blood is effectively a Hollywood-style serial killer with flashing applause lights above his head.

This is usually the part where the critic will bemoan how the new sequel betrays a legacy or ruins a saga. There’s no need. Asides from the original, this was never a particularly inspired franchise of films. It was profitable sure, but even without adjusting for inflation the most successful of the five was the second one. It was serviceable. Rambo III and Rambo were broadly quite enjoyable exercises in violent excess. Last Blood takes that excess and makes it unpalatable. It is blandly offensive, out-of-date, and ultimately quite dull. It is just there to be ignored.

I urge you. Watch something else.