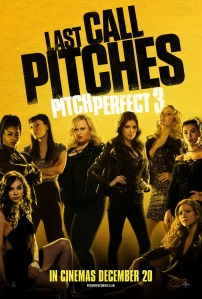 Did you ever see Are You Being Served?, a 1977 feature film adapted from the television comedy – in which the staff of the Grace Bros department store collectively go on holiday to the Spanish resort of “Costa Plonka”, only for humorous shenanigans to ensue? Or perhaps Holiday on the Buses, a 1973 feature film adapted from the television comedy On the Buses – in which the cast of bus drivers all head off to work at a resort in Wales? Or even Mr Bean’s Holiday, a 2007 feature comedy in which the mishap-prone Mr Bean travels on holiday in France – where he instigates all manner of wacky comedic hijinks? The United Kingdom has run for decades with a curious phenomenon of spinning its television comedies into entirely unnecessary and generally quite dire features that expand the TV format out to 90 minutes and, with a surprising regularity, send the characters overseas for some kind of embarrassing farce that almost entirely fails to capture the appeal of the original.

That’s Pitch Perfect 3 almost to a tee. Sure it’s American and not British, and it’s a sequel to two hugely successful musical comedies, but it takes its cast out of their earlier context, and charmlessly struggles to give them their own hilarious farce packed with slapstick, innuendo, and comical misunderstandings. The first two films were genuinely warm and delightful, and regularly very funny. Pitch Perfect 3 feels like a chore. The elements that are recycled from the earlier films were done better the first or second time. The attempts to introduce original elements falls flat on its face in almost every instance.

Emblematic of the film’s shortfalls is a turgid subplot in which Amy (Rebel Wilson) discovers she is the heir to a $180 million dollar fortune, only to be pursued across southern Europe by her criminal father (one of the all-time worst Australian accents attached to John Lithgow). It smashes suspension of disbelief to pieces and leads to a spy movie pastiche that neither suits the characters or provides anything particularly fresh or entertaining.

The regular cast continue to bring their strong blend of camaraderie and screen appeal, but it all feels worn a little too thin. In the case of franchise protagonist Becca (Anna Kendrick), her dreams of becoming a professional music producer – an angle I always found rather fascinating – get sidelined into something much more formulaic. In one or two select scenes, the film actually delivers some solid self-aware gags that manage to mock the entire idea of a second sequel. Elsewhere it simply feels like a tired second sequel.

This is a deep shame: the first two films successfully managed to play with a defy genre stereotypes to present really entertaining and warm-hearted comedy. They featured ensemble casts of particularly strong comedic talents; not simply leads like Kendrick and Wilson but supporting players including Brittany Show, Elizabeth Banks, Hana Mae Lee, and Esther Dean. Thankfully much of the cast do get the odd moment of half-decent comedy in the third film, but the laughs really are much more widely spaced out.

It is not clear what has led to such an underwhelming finale for this film trilogy – assuming Universal Pictures is not tempted to make a fourth installment. Screenwriter Kay Cannon has returned, this time with co-writer Mike White (School of Rock, Enlightened). Trish Sie takes over as director, marking Pitch Perfect‘s third director in three films. She directs the film with a solid hand and pace, without ever really putting a stylistic stamp onto proceedings. In all, it does feel as if nobody really wanted to make this film. It feels un-enthused and perfunctory. More than that: it feels contractually obliged.