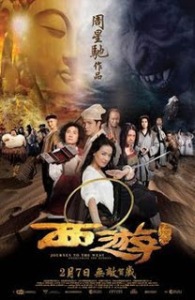 Most people seem to have encountered Journey to the West in one form or another. Most Australians my age will have first encountered Wu Cheng’en’s legendary Chinese novel via its Japanese TV adaptation Monkey, which the ABC broadcast on a seemingly endless look during the early 1980s. More recent audiences might have seen it adapted by Hollywood in The Forbidden Kingdom (2008), or the admittedly very loose adaptation in the popular anime Dragon Ball. The story basically follows a Buddhist priest on a pilgrimage from China to India, accompanied by three supernatural creatures: a water monster, a pig monster, and the boistrous Monkey King.

Stephew Chow’s 2013 film Journey to the West: Conquering the Demons is another rather loose take on Wu’s novel. It seems to make two major changes: firstly, it presents itself essentially as a prequel, set prior to Xuanzang (aka Tripitaka, for English viewers) embarking on his pilgrimage; secondly, it presents his three companions Sandy, Pigsy and Monkey not as fallen immortals from heaven but as terrifying and monstrous demons in need of hunting down and taming.

Journey to the West is not new territory for Stephen Chow: in 1995 he starred in Jeffrey Lau’s two-part smash hit comedy A Chinese Odyssey, which remains a cult favourite among enthusiasts for Chinese language cinema. Conquering the Demons is a significantly different take, however: still filled with comedy but also boasting extensive action and unexpected moments of horror.

Let’s look at the comedy first, since Conquering the Demons is above all else a comedy. Stephen Chow is a master of a form of film comedy known as ‘mo lei tau’, or ‘nonsense’ comedy. It’s a form of comedy less concerned with obvious jokes and more with unexpected non-sequiturs, deliberate contrasts between action and dialogue, and cultural and historical anachronisms. One character will begin politely asking questions to another in the middle of a pitched battle. A thief who’s faked his own death finds he can’t turn off the blood-spraying prosthetic he has built, and tries to continue a normal conversation as fake blood spews endless from his neck. A monk climbs a mountain to meet with the Monkey King, only to find he’s a middle-aged lothario with thinning hair and 1970s dance moves. When done well, this style of comedy is enormously funny, and via previous films including Shaolin Soccer and Kung Fu Hustle Chow has firmly established himself as a master of mo lei tau. Beyond anything else Conquering the Demons is a remarkably funny movie.

The action is brilliantly staged, with numerous sword-fights and kung fu displays. It’s also liberally packed with computer-generated effects, some of which are exceptional in how they have been designed and employed. Admittedly the reliance on CGI grows a little out of the control by the film’s climax, but by that point I was too well engaged with the characters to really mind all that much. It’s the horror that surprised me the most. It only creeps in occasionally, but when it does it’s unexpectedly effective and wildly left of field. It gives the film an entirely new angle on the source material that I don’t remember seeing before. Chow is smart enough to use the horror elements sparingly, and as such they simply add another layer to the film rather than send it too far off-course.

Wen Zhang is great as the young Xuanzang, performing with a wide-eyed naivety and relentless clam optimism. Other demon hunters track down and murder demons with swords and enchanted rings; Xuanzang calms them with a music box and reads them nursery rhymes. Huang Bo is exceptional as the Monkey King, playing the role with relaxed slouches and seedy sideways glances. It would seem close to impossible to do something genuinely new with the character after so many other adaptations, but he really manages it. In later scenes he shows off even more striking sides to the character: not only confident and brash but actively mean-spirited and cruel. To me the highlight among the cast is Shu Qi as Duan, a talented demon hunter who keeps crossing paths with Xuanzang. I’ve seen her play dramatic roles for years, in the Young and Dangerous films, or The Eye 2, or Confession of Pain. Until I watched Conquering the Demons I had no idea what a strong gift she had for comedy. She has an enormous screen presence as well; she’s easily the most charismatic thing on screen.

Anyone who has already seen Chow’s earlier films will not be surprised to see Conquering the Demons continues his outstanding track record. Anyone who hasn’t seen his films before will be in for a treat: this is a great movie.

This review was originally published at The Angriest on 22 July 2015.

One thought on “REVIEW: Journey to the West: Conquering the Demons (2013)”