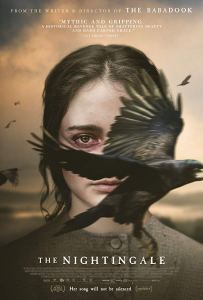 When Irish convict Clare (Aising Franciosi) suffers an unimaginable injustice, she sets out across the Tasmanian wilderness on a quest for revenge. Aiding her on her travels is an Indigenous tracker named Billy (Baykali Ganambarr), who faces personal tragedies of his own.

Jennifer Kent made an enormous impact with her first feature, the 2014 horror film The Babadook. It has taken more than four years for her sophomore feature to reach cinema screens, but it has been absolutely worth the wait: unwilling to sit on her laurels, Kent has shifted gears from horror to a historical story of racism and revenge. She confronts Australia’s bleak colonial past in an uncompromising fashion, and delivers a thriller that is equal parts effective and uncommercial. It stakes a very firm claim for the best Australian film of the year so far.

It is the violence that seems to be getting discussed the most. Viewers considering watching The Nightingale should have the chance to know going in that it is a deliberately confrontational work of film. Stark, graphic violence of both a physical and sexual nature is depicted on screen – particularly in the film’s first 20 minutes – not to mention blunt murder of both adults and children. In all honesty it is the sort of challenging content that trumps concerns over revealing elements of the plot; while not the most graphic violence ever depicted on screen, for many viewers it may well be the harshest they have personally had to sit through. Anybody not willing to risk it should have no qualms in sitting a film like The Nightingale out.

It is violence for a worthy purpose. It pulls no punches in depicting colonial English racism, and it makes a stunning parallel between the plight of Tasmania’s Aboriginal peoples and that of Irish convicts. Between the two cultures the film forms a stunning indictment of colonialism and uses common ground to develop a strong and developing relationship between Clare and Billy – the film’s two protagonists. Both characters are beautifully scripted and developed, and are allowed the ability to grow and change as their story progresses. For Clare it is a near-masterpiece of screenwriting, with her living through a process of hardening and fracturing as she is forced to endure one trial after another. The Clare of the final half hour is a more weathered and powerful character than the Clare of the opening act, and Aising Franciosi does an awards-worthy job of playing that out on the screen. Likewise Baykali Ganambarr does a superb job of playing Billy, in his case managing to balance some of the film’s bleakest moments with some of its funniest bursts of comedy. The comedy is exceptionally well balanced in a fairly risky context – how do you drop a joke into a narrative about genocide? – and is a very welcome addition given the cruelty of the events depicted.

The film is visually striking, with cinematographer Radek Ladczuk making tremendous use of the Tasmanian landscape to create something threatening and oppressive. Much of the film is shot in a hand-held, very immediate fashion that avoids it feeling like something historical and reserved. There is an immediacy to the film’s aesthetic that heightens the awful reality of what is going on.

The Nightingale is a remarkable film. It is also, to be honest, a terrible one. The story Kent has chosen to tell does not easily enable her to make one version of the film without bringing along the other. On the one hand, it draws a firm parallel between English racism towards the Irish and English racism towards Aboriginal peoples, which is a provocative and challenging act. At the same time, even Kent does not attempt to pretend the severity and cruelty of that racism is evenly distributed between the groups. It is oppressive and unpleasant being Irish in colonial Australia, but for Aboriginal peoples it is actively lethal. Laying them out side-by-side, while forming an interesting connection between the protagonists, cannot ultimately avoid graphically murdering numerous people to provide a transformative experience for one young Irish woman. Despite this film’s enormous quality and worth, it does ultimately use depictions of genocide to inform a white feminist narrative. While Kent navigates the territory in as responsible a fashion as she can, this ultimately very white treatment of race feels deeply problematic. People are going to find this film exploitative, and to be honest they have a strong, valid point. People are also going to find it a revelation: they are pretty much on the money as well. Sometimes complex issues require troublesome artistic responses.