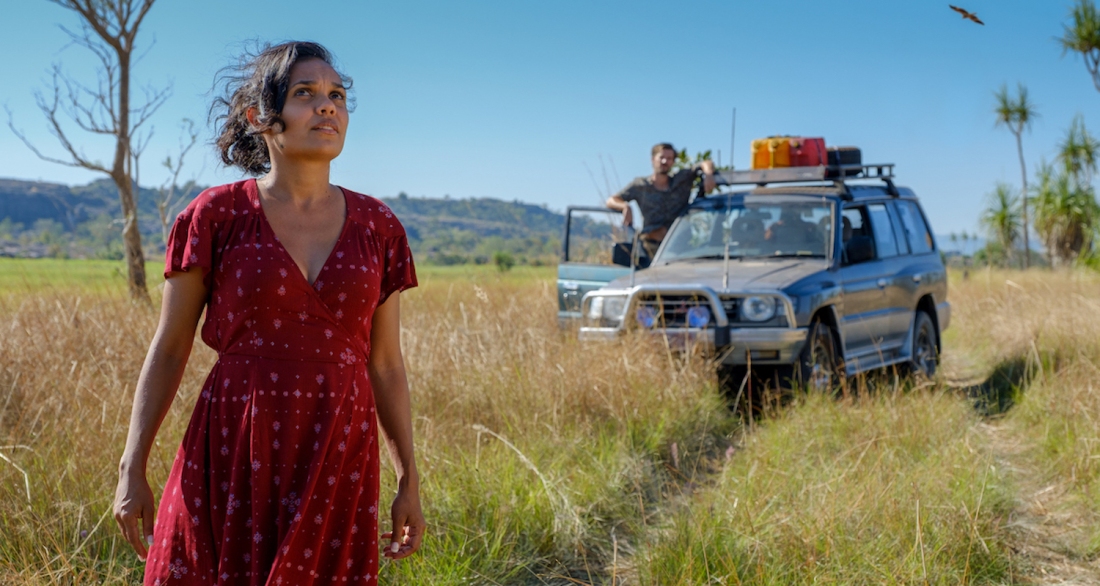 Lauren (Miranda Tapsell) is an ambitious lawyer working in Adelaide. When her boyfriend Ned (Gwilym Lee) proposes to her – and proposes getting married straight away – Lauren immediately plans a wedding in Darwin near friends and family. Once in Darwin, however, she finds her mother has gone missing and there are only a few days left for her to be found before the wedding is called off.

New Australian feature Top End Wedding is a bright, breezy and quite traditional romantic comedy. It fits very comfortably into an Australian tradition of such films: an irreverent tone, slightly exaggerated characters, and a side focus on the Australian landscape. The characters are all deeply likeable, including Lauren – charmingly clumsy, constantly nervous – and Ned – dangling just on the entertaining side of a Hugh Grant-esque English stereotype. Highlights among the supporting cast include Huw Hugginson as Lauren’s fretful father Trevor, and Kerry Fox as her blunt and uncompromising boss Hampton.

The screenplay is by Tapsell herself, written with Joshua Tyler, and she takes the opportunity to write herself an outstanding starring role. It’s a hugely valid strategy, undertaken most famously by Sylvester Stallone’s Rocky (1976), and hopefully it pays strong career dividends for her. She has developed herself a character that suits her talents perfectly. The script’s first act is admittedly a little shaky, but events build in the mid-section, and the final half-hour set on the Tiwi Islands in Australia’s far north is near-faultless.

Wayne Blair handles the story with a wonderfully light and easy touch, and makes great use of the Northern Territory landscape. He emphasises the size of the country and its unique wildlife, as well as the particular lifestyle and culture of Darwin. The film is absolutely gorgeous to look at. A late scene, set on the Tiwi Islands, delivers a striking explanation of the indigenous connection to country that is one of the highlights of the entire film.

The above all takes Top End Wedding so far: what pushes it from an entertaining and moderately enjoyable comedy into a must-see Australian classic is its excellent treatment of aboriginality. There is an authenticity to its indigenous characters and setting, and an upbeat lack of race issues or representations of racism. It shows its Australian audience how our society should be, rather than what it currently may be. It makes Top End Wedding such a wonderfully warm-hearted affair; it gives us all a target for which to aim. I suspect tourism to the Tiwi Islands is about to skyrocket. The film even throws in a marvellous cameo by playwright Jason de Santis that smoothly adds an LGBTIQ edge to everyday Tiwi society.

It is testament to the growing strength of the Australian film industry that it can freely accommodate Sweet Country – a searing indictment of white Australia’s relationship with indigenous society – one year, and an optimistic indigenous comedy like Top End Wedding the next. As a nation we have a long way to go to reach a full and unified reconciliation: it feels like Sweet Country reminds us how bad things things were when we did not work towards one, and Top End Wedding entices us with how remarkable and rewarding reconciliation could be. I know which version of Australia to which I would rather belong. This film is just packed with so much heart it is breathtaking.