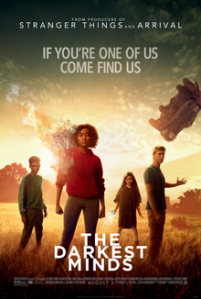 A mysterious virus sweeps across the USA, killing 98 per cent of the children who contract it and gifting the survivors with psychic powers. When some of these powers turn dangerous, the government starts capturing children and teenagers and confining them to camps and categorising them into colours. Ruby Daly (Amandla Stenberg) is an ‘orange’, with the power to control minds – and thus secretly scheduled to be euthanased. She escapes her camp, teaming up with a group of fellow runaways to find a rumoured sanctuary away from the adult world.

Adaptations of young adult novels have been a lucrative business for Hollywood in recent years, with the likes of Harry Potter, Twilight, and The Hunger Games becoming massively successful franchises, collectively generating literally billions of dollars in box office grosses. As a result most studios are on a constant look-out for new book series to potentially adapt to the screen. The Darkest Minds, directed by Jennifer Yuh Nelson, adapts Alexandra Bracken’s novel of the same name, and with a clear eye towards adapting more of Bracken’s books down the line. That is a foolhardy mood, since The Darkest Minds spends the majority of its time setting up a world, a conflict, and a set of characters – all targeting what is clearly intended to be a multi-film franchise – and in doing so neglects any attempt to be an entertaining film in its own right. It is basically the first third of story: it is deeply unsatisfactory, pedestrian, and deeply unsatisfying.

This all feels like a deep shame for Amandla Stenberg, who headlines the film with more talent and charisma than her material deserves. She is no stranger to adapting young adult novels, having first grabbed the audience’s attention in the pivotal role of Rue in The Hunger Games. While she is engaging and sympathetic here, there is nothing in the screenplay for her to properly tackle. The supporting characters feel much more bland and stereotypical, particularly Liam (Harris Dickinson) – a telekineticist and obvious love interest who ticks every box of the ‘heroic boyfriend’ trope without adding anything new to the equation. To its credit the film casts some great adult actors in supporting roles, including Gwendolyn Christie and Bradley Whitford – but wastes them, presumably setting them up for the sequels instead.

The story is easy to predict, and feels cribbed from numerous other post-apocalyptic teenage movies. There is some entertainment value, but it is a weak sort of lazy Sunday afternoon entertainment. Some viewers may enjoy the film, and certainly I didn’t hate it, but there are much better films to be seen. Director Jennifer Yuh Nelson (Kung Fu Panda 2 and 3) makes her live-action debut here, and gives everything a fairly strong visual aesthetic, but she simply cannot breathe life into such a formulaic and derivative script. It is strange for such an ordinarily composed film to be inspired by so much ambition. You can tell from the open ending that 20th Century Fox was expecting to shoot all four sequel novels and make a franchise out of the material. In effect they simply neglected what they had, and guaranteed its failure. It is clear that no sequel is on the horizon. That leaves an entirely redundant film. It has no reason to exist, or indeed to be seen.