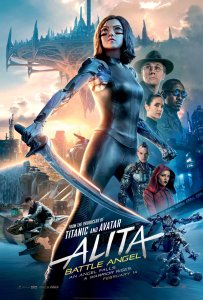 Centuries after a war that almost entirely destroyed the Earth, the cyborg Alita (Rosa Salazar) is found in a scrapheap and returned to working order by the cyber-doctor Dyson Ido (Christoph Waltz). Suffering from total amnesia, Alita slowly becomes familiar with her new home of Iron City – and finds herself drawn into the machinations of crime boss and sports magnate Vector (Mahershala Ali).

Decades after it was first put into development by director James Cameron, this adaptation of Yukito Kishiro’s manga Battle Angel Alita finally reaches the screen with Cameron in a producer role and the direction taken up by Robert Rodriguez.

While the film’s commercial prospects are yet to be seen, one thing that is clear is that Alita is going to immediately develop a pretty firm cult following. Its world-building, which is strikingly faithful to Kishiro’s manga and boasts the lived-in atmosphere shared by all great science fiction features. The background detail clearly showcases not just a city but a culture: people buy groceries and hold down jobs, and the future still has cafes, sport, and cults of celebrity. The pulled-together technology of a salvage-based society is wonderfully designed and effectively realised. While it is possible to spot all manner of influences and inspirations for Iron City and its people, the collective picture is one that feels distinctive and original.

The characters by-and-large look effective as well, although the ambition of the digitally-enhanced characters does outweigh the results on screen to a small degree. Alita herself, played with enormous charm by Rosa Salazar, spents the whole file precariously balanced above the uncanny valley. Her digitally enhanced features, which come dominated by large anime-esque eyes, take a few minutes to get used to and – while impressive on a technical level – are never properly justified in the screenplay. The supporting cast are broadly solid, while struggling with underdeveloped and excessively archetypal characters. Christoph Waltz is a graceful and sympathetic presence as Ido, and gamely sustains his character even while fighting cyborgs with an enormous manga-sized jet-propelled mega-hammer. There is quite a lot in the film like that hammer, too. The film refuses to compromise with a mainstream audience: the production team has clearly decided that if the viewer cannot suspend their disbelief at some hilariously peculiar elements, that is down to the viewer.

Antagonists come via Mahershala Ali as local gangster Vector – a beautifully silken voice papering over an undermotivated villain – and Jennifer Connelly as cyborg doctor Chiren – better motivated, and nicely ambiguous. A third villain comes via the mysterious Nova, an overseer who communicates his orders by taking over other people’s bodies from afar.

Sadly the attractive visuals and entertaining cast come paired with a deeply shaky screenplay. Much of the dialogue is trite and obvious, causing more than a few cringe-worthy moments as the film goes on. For the first half of the film it plays in a surprisingly amiable and enjoyable fashion, introducing Alita in a pleasant fashion while exploring Iron City via her friend (and, predictably, love interest) Hugo, played rather blandly by Keean Johnson. When the film enters a more urgent, dramatic phase, it all begins to wobble. Villainous agenda begin to collide and overlap, and the structure and pace stagger all about the place. A Rollerball-inspired sport is introduced early, but not fully employed in the narrative until well after it feels relevant. Things are clearly presented as urgent, and then forgotten about for an absolute age. The villain’s plans are never properly laid out in a sensible fashion. Threaded through the entire film is an obvious hook to at least one sequel, which distracts from the actual story being told in the moment.

It is something of a relief that while the story wobbles, it never completely falls over. Events keep moving enough that it’s possible to simply enjoy what is on the screen without being overly concerned about where things are going. There is an audience out there – I expect mostly the audience who enjoy the Wachowskis’ Matrix sequels, Speed Racer, and Jupiter Ascending. It is a film with plenty of exciting moments, likeable characters, and stunning imagery. The plot and screenplay are weak, but personally I’ll take exciting but flawed over tidy but ordinary any time.