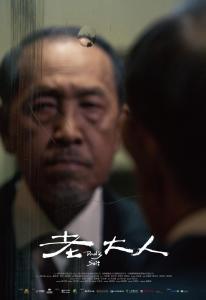 Elderly widower Chin-mao (Hsiao Hou-tao) lives alone in his family house in Pingxi. When a painful accident sees him admitted into hospital, his middle-aged children begin argue over whether or not to send him to a nursing home in Taipei. Chin-mao, however, stubbornly wants to spend his final days alone in Pingxi.

Dad’s Suit is the feature directing debut of Taiwanese writer/director Hung Po-hao. It is a low-key film that is small in scale and intimate in tone. It is also arguably low in ambition: there is something much too familiar about an ill-tempered octogenarian struggling with his adult children’s attempts to get him out of the way and into full-time care. While may be some novelty for English-speaking viewers in seeing it play out in a foreign setting, it still ploughs a well-furrowed subject matter and fails to reach any new conclusions. We have seen variations of this story before; we will undoubtedly see variations of it again – most likely via TV movies of the week.

While there is a depressing over-familiarity to the story, Hung pulls some impressively strong performances from the cast. While the characters are well-worn archetypes, they are also scripted and performed very well. Events play out in a predictable manner, but they also play out with a engaging level of depth. Altogether it is a modest but charming film. At its centre stands Hsiao Hou-tao in the lead role of Chin-mao. The film introduces him in an understated fashion: an elderly neighbour has just died with Chin-mao reacting stoically from his front window. He is effectively waiting his turn. He spends his days quietly, mostly pottering around his garden and vegetable patch, and largely in solitude. Hsiao is wonderfully engaging in the role with a charmingly cantankerous manner, and as his children try to convince him to accept more care his constant resistance makes him all the more likable for the audience.

While King Jieh-wen is an effective player as son Yi-Cheng, Phoebe Huang is sensational as Yu-chen, Chin-mao’s protective and overly invested daughter. Her performance is heartfelt and emotive, and deeply touching. You get stand-out acting like this from time to time: the film itself is mediocre, but one key performance out-classes and over-delivers compared to all the other elements around it. While it is not quite enough to overcome the ordinary premise, it does provide an entertaining compensation for the film’s lesser qualities. I am keen to see Huang in some other films given the strength of her acting here.