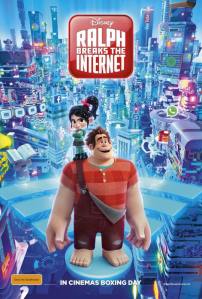 Six years after the events of Wreck-It Ralph, Ralph (voiced by John C. Reilly) and Venelope (Sarah Silverman) have settled into a comfortable life inside the games of Litwak’s Family Fun Center. When a mishap causes the steering wheel on Venelope’s game Sugar Rush to break, and the whole machine is set to be removed, she and Ralph venture out of the arcade and onto the Internet to find a replacement.

Walt Disney Animation Studios do not typically make sequels. In the studio’s official series of theatrically released animated features they have made three: The Rescuers Down Under in 1990, Fantasia 2000 in 1999, and now Ralph Breaks the Internet in 2018. That’s just three times in more than 80 years. I have always thought it was one of the strengths of WDAS that their films did not rely on sequels, but rather embraced new characters and stories each time. Sadly Ralph Breaks the Internet does nothing to change my opinion on that, and I am warily eyeing next year’s Frozen 2 with more suspicion than enthusiasm.

Going by the general audience and critical reactions, I am likely to be told repeatedly I am wrong on this, but Ralph Breaks the Internet is not a very good film. You will probably enjoy it if you go and see it. You will probably laugh at a lot of the jokes; even I laughed out loud a couple of times. John C. Reilly and Sarah Silverman return to their characters with wonderful performances, and the smartly developed world of retro game characters around them does briefly return. Then the film moves from arcade to Internet and kind of falls apart.

The core problem with Ralph Breaks the Internet is that it essentially has no storyline. Things happen. There is a quest to purchase a Sugar Rush steering wheel, and that brings its own challenges and set pieces, but halfway through the film it segues so strangely that the original point of the story becomes an afterthought. One of the strengths of recent Disney features (referred to as the “Disney Revival”, beginning with The Princess and the Frog) has been the strength in plotting: tightly constructed three-act narratives with solid foreshadowing, thematic through-lines, and well-defined characters. By contrast, every new character in this film is a plot cypher. Each scene is simply a means to lead to another one.

The film also segues mid-way into Venelope’s personal struggle to continue being excited playing the same kart racer game for the remainder of her life. It is an odd thematic thread to follow, partly because it seems half-hearted and partly because it appears to run counter to the entire point of the original film. Wreck-It Ralph told viewers to do what one is good at and find satisfaction in that. Ralph Breaks the Internet tells the same audience to quit whenever you are bored.

The pop culture cameos that helped to make the original Ralph so funny stumble badly here. It’s partly because what works in videogames doesn’t work in the Internet in general. The amusement of seeing Peach from Super Mario Bros interact with Chun Li from Street Fighter cannot be repeated by corporate logos for Amazon, Ebay, and others appearing in the background of scenes. An attempt at personifying Internet trends and activities in humanoid form also falls fairly flat. A sequence involving Ralph making social media videos, all based on popular Youtube trends, turns out to be a fool’s errand. The Internet moves fast: attempting to capture current crazes in a film simply results in this entire section of the film feeling out of date on release. There was an enormous charm to Wreck It Ralph. Ralph Breaks the Internet is comparatively charmless.

A lengthy set piece sees Venelope lost in a Walt Disney website, one packed with cameos from various Disney-owned properties. A scene involving Disney princesses is almost worth the cost of admission, despite the film’s other faults, but then they are over-used and lose their appeal by the film’s end. It is also a little entertaining to see Star Wars and Marvel Studios characters popping up, but even that is a reminder of just how frighteningly ubiquitous the Disney brand is becoming in popular film. Watching one property being used to feature in another feels like watching a snake eat its own tail. The company honestly owns too much intellectual property for its own good.

Altogether it seems that with Ralph Breaks the Internet, the “Disney Revival” has come to an end, leaving behind a train of excellent animated films from The Princess and the Frog through to Moana; I recommend all of them ahead of this.