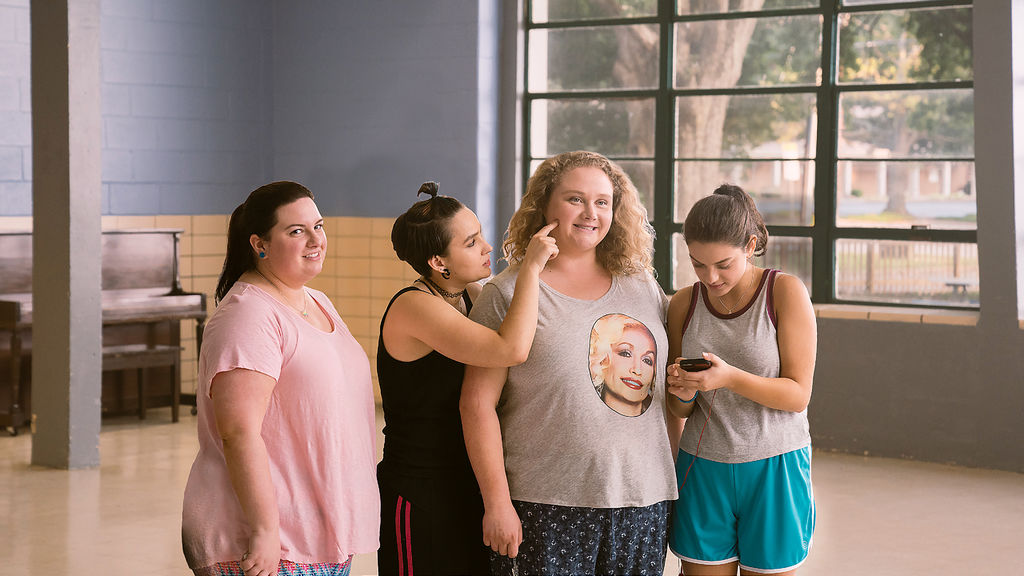 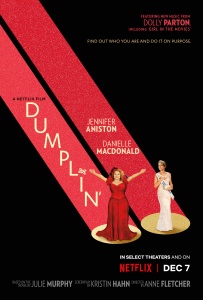 Willowdean Dixon (Danielle Macdonald) is a teenager living in a small Texas town. Her mother Rosie (Jennifer Aniston) is a former beauty queen and organiser of the local teen beauty pageant. Willowdean, nicknamed “Dumplin” by her mother, is overweight and miserable, and mourns the recent death of her Dolly Parton-obsessed aunt Lucy. When she discovers that Lucy once tried and failed to enter the town pageant, Willowdean decides to enter the pageant herself in a protest against its beauty standards and her own mother.

Dumplin’, adapted by Kristin Hahn from Julie Murphy’s novel and directed by Anne Fletcher, is an absolute delight. It is a Netflix production, available to stream into your home or smartphone right now – although as with all streaming films I recommend you find the biggest screen you have. I adored it, and I suspect if you have any interest in things genuine and heartwarming you will take to it as well. It is a proper crowd-pleaser. It is packed with heart, humour, drama, and proper surprises. Its characters feel like real people. The story is small and personal – really small town, young woman comes to a self-realisation stuff – and with laser-like precision captures its emotional impact perfectly. It’s even got a wonderful Dolly Parton soundtrack.

Danielle Macdonald is superb as Willowdean. I had previously seen her play a very different character in 2014’s Every Secret Thing, which was a bleak and uncomfortable drama. She does teen comedy just as well, despite already being 27 years old. There’s a world between her roles in the two films; so much so that I’m watching what Macdonald does in future, since she’s clearly got a huge amount of talent. Likewise Jennifer Aniston simply inhabits her character without putting a foot wrong. Together they create a fabulous and easily recognisable relationship: antagonistic, but also grounded in genuine love for one another.

Willowdean does not enter the pageant alone. Coming along for the rebellion are her best friend Ellen (Odeya Rush), the oddly placed but nicely funny metalhead Hannah (Bex Taylor-Klaus), and the religious obsessive Millie Michaelchuk (Maddie Baillio) – who starts off as an annoying stereotype and unexpectedly winds up the film’s most valuable player.

That is the genius part of Dumplin’. It never takes the narrative decisions that you expect it to. Its story takes up some very familiar and well-worn tropes, but then twists and flips them into fresh and delightful new directions. It makes whatever choices advance its characters, or complicate the story, or which maintain a sense of realism. They are all small highlights, but they accumulate over time. Take the pageant itself. Genre tradition dictates that it’s going to have at least one bitchy, mean contestant to act as an antagonist – Dumplin’ does not really have any. They are all nice people. All over the place there are scenes that you instinctively know how they’re going to play out, and then they play out in a different way. It takes a little while to notice these changes, but once they’re apparent it makes you wonder why filmmakers don’t do this kind of subversion more often.

Midway through the film Willowdean follows her late aunt’s notes to a bar out in the middle of nowhere. It turns out to be a popular gay bar with a regular Dolly Parton-themed drag queen night. Harold Perrineau is superb as Lee, the performer who teaches the girls how to perform onstage – he brings a tremendous sense of charm and warmth. It is probably the film’s greatest innovation too. It smashes beauty pageants and drag queens together in a way that’s slyly amusing, but genuinely affectionate too.

It may be set in a small town with high schoolers and queens of multiple varieties, but in truth the film Dumplin’ most resembles is Rocky (1976). The underdog protagonist, the against-all-odds struggle to win a championship, the awkward romance, and so on. It even has its own training montage. Dumplin’ is the most unexpected delight of my movie-going year.