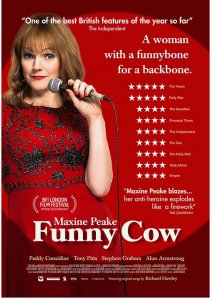 In northern England in the 1970s, a troubled woman (Maxine Peake) doggedly pursues a career as a stand-up comedian.

It is extremely important to note two things about Funny Cow, the new feature film from director Adrian Shergold. Firstly, despite its title and subject matter (the making of a stand-up comic) it isn’t a comedy. Secondly, you really shouldn’t care: this is an excellent character drama combining a bleak wit with plain, simple bleakness. It is a difficult picture in many respects, but in all honesty that’s a core part of its appeal. This is a film that catches the audience off-guard. At some points you will laugh. At some points you absolutely will not. In those off-kilter moments in the middle, you won’t be certain if you’re allowed to laugh or not.

“Funny Cow” – that’s the only name we’re given for Peake’s determined protagonist – lives a miserable life of failed ambitions, parental abuse and neglect, and domestic violence. The film is narrated by her from the end of her journey, but soon begins diving into her past: her impoverished childhood, her unhappy marriage, and her tentative pleas for a down-on-his-luck comedian (Alun Armstrong) to coach her in how to follow him. The film is unexpectedly stylised, cutting in and out of sequences in media res, but always following a tight focus on Funny Cow herself. She is in almost all of scenes during the film, and those in which she doesn’t feature are usually talking about her anyway. Shergold dresses the character in various shades and styles of red throughout, a visual motif that enables her to pop off the screen from beginning to end.

Maxine Peake is easily the film’s strongest asset, playing a deeply flawed and unsettled character with a remarkable passion and attention for detail. Periodically she’ll even look direct at her audience down the barrel of the camera lens, breaking the fourth wall and making us somehow complicit in her story and her choices. Also very strong is Paddy Considine as Angus, an upper middle-class bookseller with whom she enters an affair to escape her violent husband Bob (a realistically menacing Tony Pitts). Angus’ attempts to lift Funny Cow’s sense of culture and literature are almost comically inept, including trips to see French cinema and Shakespeare. Of course these attempts backfire on him.

A strong supporting cast fills out the story, notably Stephen Graham in dual roles as an abusive father and weak-willed brother, Alun Armstrong as a tragic and washed-up comedian, and Macy Shackleton as Funny Cow’s imaginative and determined childhood self (credited as Funny Calf). Richard Hawley composes the film’s engaging and well-pitched musical score, and even cameos as a nightclub singer alongside real-life pop singer Corinne Bailey Rae.

Despite the slightly artificial delivery of the story, Shergold directs a pitch-perfect image of 1970s England: the nicotine-stained wallpaper, the grimy northern back streets, and the specific fashions of the time. The realism extends to the film’s stand-up sequences, which are bluntly and deliberately offensive and packed with casual sexism and racism. As noted above, while there may be a wit and a sarcasm to the film that generates quite a few genuine laughs, this is not a comedy. This is a bleak and miserable place to visit, but thanks to the script (by actor Tony Pitts, who also plays abusive husband Bob), Shergold’s strong direction, and faultless performances across the board, it is also an exceptional piece of filmmaking.