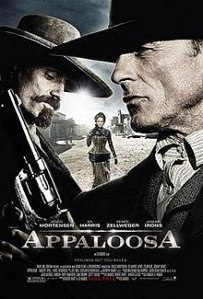 Hired gun Virgil Cole (Ed Harris) is hired by the people of Appaloosa, New Mexico – along with his partner Everett Hitch (Viggo Mortensen) – to protect the community from the nearby rancher Randall Bragg (Jeremy Irons). While his war with Bragg escalates, Cole also romances the newly arrived piano player Allie French (Renée Zellweger).

Appaloosa is a 2008 western co-written, directed by and starring Ed Harris, and based on the 2005 novel by Robert B. Parker. It was largely overlooked at the time, although that’s hardly a surprise; westerns really are not the blockbuster entertainment that they used to be. It has found a long afterlife on home video and television, however, which is no great surprise. This is a well shot, richly characterised and surprisingly traditional film. There is enough originality to let it stand out, and enough tradition to keep it well within genre boundaries.

One of the nice ways in which the film stands out is the gentle, patiently established friendship between its two leads, Virgil and Everett. Ed Harris makes time between the shoot-outs and the showdowns to present proper conversations between the two men. It shows off their bond. It elaborates on character. It pushes each of them forward in their respective character arcs. By knowing them well, the viewer is invited to engage with them more. I suspect it may madden some viewers seeking horse chases and gunfights, but it enriches the rest of the film tremendously.

Harris portrays Virgil as a man with a genuinely troubled past. We never quite learn what it is, but its after-effects leak out of him in times of rage or stress. His violent, frightening temper speaks to trauma, and his dogged insistence on continuing a romance with an openly unfaithful women suggests some desperate yearning for intimacy. In many ways he forms a western archetype: well-dressed and civil on the outside, but with a creeping monster within. Everett seems a far more patient and understanding character – he essentially has to be with a friend like Virgil – and Mortensen portrays a familiar and reassuring sort of world-weary reliability. At first it seems Virgil is the more interesting character, but by the film’s clever and unexpected finale it is Everett who winds up being the most fascinating. It is another excellent and subtle piece of acting by the constantly underrated Mortensen.

Renée Zellweger gives a strong performance as Allie. She is the only major female character in the film, and ultimately presents as duplicitous and manipulative. She acts out of self-interest, making her quite an unsympathetic love interest for Virgil, but simultaneously a great contrast to the usual goodly women that tend to populate the American western. The film leaves its other female characters sadly undeveloped, notably Arianda Gil as Everett’s sex worker girlfriend Katie. It is a missed opportunity.

Beyond the acting, the film neatly blends short, brutal violence with a surprisingly traditional visual take on the classic western. Dean Cundey’s cinematography deliberates gives the film a formal and old-fashioned aesthetic, and it is that comfortable and well-worn style that allows both the characters and the violence to stand out. Shoot-outs are short and bloody. Bullet wounds can be non-fatal and messy. The film’s prologue sees ranch owner Bragg (an enormously watchable Jeremy Irons) shoot down a marshal and his two deputies so fast that scene feels over as soon as it begins. What feels like a classic showdown in an empty street is a blunt, sudden flurry of shots before almost everybody is lying on the ground. The film walks a tightrope between visually reflecting the conventions of the genre and violently subverting them as well. It is why it sticks in the mind so effectively.

Ed Harris has to date only directed two films: the artist biographical picture Pollock, and Appaloosa. I hope he soon returns behind the camera to direct a third.