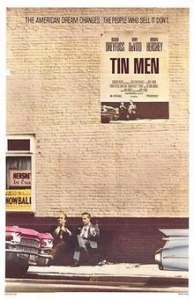 Ernest Tilley (Danny DeVito) and Bill Babowsky (Richard Dreyfuss) are two aluminium siding salesmen working in 1963 Baltimore. After a collision damages both of their beloved Cadillacs, Tilley and Babowsky begin to engage in an escalating back-and-forth fight for revenge that appears to culminate in Babowsky cheating with Tilley’s wife Nola (Barbara Hershey). Meanwhile a new government commission investigating unethical practice in the construction industry hangs over them both.

Tin Men is a 1987 comedy written and directed by Barry Levinson. It is one of Levinson’s four well-regarded “Baltimore” pictures, which kicked off with Diner (1982) and subsequently continued with Avalon (1990) and Liberty Heights (1999). It is a well-observed and dialogue heavy film, although ultimately outstays its welcome by a solid quarter-hour or so. It begins well, but to an extent squanders audience goodwill as it goes.

When it does work, it sparkles. The lengthy dialogues scenes are packed with wit and charm, and the gradual shift in Tilley and Babowski’s relationship – although it remains spiky – is beautifully developed and exceptionally well plotted. The three leads are as good as perfect in their roles: DeVito doing a wonderfully shambolic sort of sad-sack portrayal, Dreyfuss diving into the sort of arrogant, pent-up yuppies that would make his career in the late 1980s and early 1990s, and Hershey drawing a well-realised and deeply sympathetic character out of the frustrated and yearning Nora.

Visually the film is well composed, with a nice sense of a nostalgic past without Levinson driving it too hard at the audience. Tonally it is balanced well, with initial comedic overtures increasingly slipping away to reveal a solid drama instead. The supporting cast is good, albeit very male-heavy. The only major flaw is in the pace. There’s no way around it: Tin Men drags.

You can see the direction of the plot from a mile away, but rather than run to the finish line it ambles. It strolls. It rapidly becomes interminable in some scenes, particularly when the film sails by perfectly good conclusions to add just a few more scenes. By the time it does end, and it is to be fair a very satisfying and light-hearted final scene, the excellent quality of those early conversations and arguments between the characters is half-forgotten.

Levinson also makes a slightly odd choice in not only using several songs by the then-contemporary British pop group Fine Young Cannivals in the soundtrack, but actually casting the band as a club lounge band in the film. While there is definitely a retro vibe to the Cannibals, they simply sound too overtly 1980s to suit the period setting. It jars – particularly in retrospect, with another 30 years between the film and audiences today.

Good performances and nice dialogue do not automatically add up to a great film. There is greatness buried in Tin Men; from time to time it’s even scattered over the surface. There is simply not enough to make the whole movie great. Very patient viewers may find it something of a gem. I suspect most will wind up finding it an regularly enjoyable but increasingly tiresome chore.