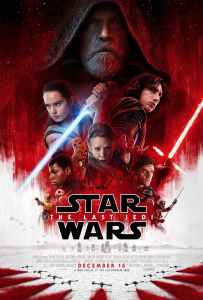 In the aftermath of Starkiller Base’s destruction, the Resistance finds itself on the run from the First Order fleet with no apparent means of escape. While hot-shot pilot Poe Dameron (Oscar Isaac) challenges the decisions made by General Leia (Carrie Fisher) and Vice-Admiral Holdo (Laura Dern), Finn (John Boyega) sets off on a last-ditch rescue mission with the resourceful engineer Rose (Kelly-Marie Tran). Meanwhile Rey (Daisy Ridley) has gone to enlist the help of the elusive Jedi Master Luke Skywalker (Mark Hamill) – only to discover he is not the man she believed him to be.

The Last Jedi came to cinemas last week on a wave of hype and audience expectation not seen since the last instalment of Lucasfilm’s Skywalker saga: The Force Awakens. It has emerged from its opening weekend with exceptional commercial success, widespread critical acclaim, and a sharply mixed reaction from Star Wars fans. It is easy to see how all three of those things have occurred. The Last Jedi is a flawed masterpiece: a film that works wonders in broad strokes, while failing to succeed in numerous smaller ways. It’s a shaky, sometimes frustrating ride, but ultimately a worthwhile one. Every Star Wars viewer is going to have a different opinion on how it rates compared to its predecessors; for me it’s somewhere ahead of Rogue One and a little behind The Force Awakens. The original three films continue to be, for now, unassailable.

Further discussion involves revealing critical moments of the film’s story; if you have yet to see The Last Jedi, I recommend you watch it before reading any further.

Director Rian Johnson certainly does an exceptional job when it comes to nailing the Star Wars tone. The original Star Wars was a mad pastiche of every movie influence that George Lucas ever had: dog-fights in space pulled straight out of a World War II film; both narrative content and world-building drawn from 1960s Japanese samurai films; shiny space fantasy lifted from old Flash Gordon serials, and so on. It is part of what made that first film so immediately effective. It is perhaps surprising that Johnson captures that essential pastiche form more effectively than any of the sequels or prequels – including those directed by Lucas himself. An opening bombing run on a First Order ‘dreadnought’ is straight out of a war movie. The film’s two key sword fights owe visible debts to Shaw Brothers martial arts films and Akira Kurosawa samurai pictures. Of course, with Star Wars itself as much an influence on Johnson as those older films were on Lucas, The Last Jedi reaches the cannibalistic point of riffing on Star Wars itself. A ground assault on the planet Crait harks back to a similar sequence in The Empire Strikes Back. A pivotal scene between Kylo Ren (Adam Driver), Rey and Supreme Leader Snoke (Andy Serkis) deliberately undertakes some shot-for-shot copies of Return of the Jedi.

Rather than simply echo old plot beats, however, as J.J. Abrams deliberately did in the franchise-settling The Force Awakens, Johnson copies old story moments in order to subvert them. The aforementioned Kylo-Rey-Snoke scene walks a remarkable tight rope act of echoing Return of the Jedi, violently up-ending things with Kylo’s murder of Snoke, and then flipping back to riff on The Empire Strikes Back instead. This time it isn’t Darth Vader tempting Luke to join him and kill the Emperor; this time the evil mastermind is already dead. It makes Kylo a fascinating antagonist, and one who seems purpose-built to challenge audience expectations. He was set up in The Force Awakens as a conflicted soul, one who actively tried to murder his conflict away. Given the opportunity to make amends here he doubles down, trying to kill two parental figures and only vacillating over attacking the third. He suffers from a seemingly permanent lack of forward-thinking, and is wildly and angrily impulsive. If the villains of the original Star Wars were effectively jack-booted nazis, and the villains of the prequel trilogy an untrustworthy government, it’s an appropriate sign of the times that the villain of this third and final set is a petulant and melodramatic young man ignorantly aspiring to half-understood fascist icons while lashing out emotionally against everybody else. For all intents and purposes, Kylo Ren is the Star Wars alt-right.

All of that makes Rey the perfect protagonist to Kylo’s antagonist. She is essentially his polar opposite: confused where he has purpose, doubtful where he has conviction, and kind where he is full of rage. Johnson deliberately ups the contrast further with the revelation of Rey’s parents – a mystery set up in The Force Awakens. Subverting expectations she is not a Skywalker, and has no apparent bloodline relationship to any key figure in the franchise. Kylo, as a direct descendant of Darth Vader, is essentially Star Wars royalty. The anonymous, impoverished Rey is the faceless, nameless proletariat rising up to drag the entire dynasty down. On the one hand it is a creative masterstroke. On the other it is a jaw-dropping act of sabotage, following up on seven films in a row of dynastic space fantasy by tearing it all to pieces with one full film to go. In making The Last Jedi Johnson borrowed all of the toys from Lucasfilm’s chest, but has wound up breaking several of them in the process. It makes for a provocative film, but arguably a very poor Star Wars film. This is not necessarily the film some fans – and to be honest I can probably be included among them – came to see.

This failure to give satisfactory answers to questions raised in The Force Awakens is an irritating problem in The Last Jedi. Who is the mysterious Supreme Leader Snoke? It is ultimately irrelevant. Who are Rey’s parents? Nobody important. How did Luke Skywalker’s original lightsaber, lost along with his hand during The Empire Strikes Back, wind up in a box in the basement of an alien bar? You’re not getting anything from The Last Jedi. There is a term in improvisational performance called ‘blocking’: essentially in a performance between two actors one will throw an idea out to the other (‘Here we are on the moon!’) but the other will flatly reject the improvisation rather than working with it (‘We’re not on the moon, we’re riding the number 15 bus from Glendalough!’). It’s considered poor improvisational technique, and transferred to the act of franchise film-making it strikes me as relatively poor writing. Make a Star Wars film and you get what you are given, and you follow up on what’s been left for you. In the case of The Last Jedi it really feels as if Johnson was simply disinterested in making the sequel that Abrams had set up, and simply ignored it. It makes the rest of the film a little less enjoyable because of the irritation in not having these elements from the previous film satisfactorily resolved.

The film’s foreshadowing of a permanent end to the Jedi-Sith dynamic feels much more natural, and less controversial. The Jedi and Sith have gone back and forth for generations, and the idea that they are all to be left behind in the past – a theme that the film hammers very firmly into its audience – makes perfect sense. I think perhaps Johnson plays this direction a little too hard. There are a few scenes depicted that would have been perfect in the ninth and final film, and there is a small sense of ‘jumping the gun’ that leaves me wondering where precisely 2019’s Episode IX is going to go.

Taking a step back more generally, Johnson adopts a nice parallel set-up for the story. He focuses on three heroic protagonists: Jedi-in-waiting Rey, hot-headed pilot Poe, and reluctant hero Finn. Each of them essentially gets two mentor figures to challenge their thinking and force their character development. For Rey it’s Kylo and Luke: one an impulsive and angry despot, the other a good-hearted but broken teacher. For Poe it’s Leia and Holdo, one of whom he idolises and the other he despises. For Finn it’s the earnest and idealistic Rose (with Tran’s performance easily making her the film’s stand-out new element) and the cynical hacker D.J. (Benicio Del Toro). The character development is remarkable compared to previous Star Wars films. Everybody learns something. Everybody changes.

Some of the biggest changes can be seen in Luke Skywalker. He’s an icon of pop culture, and hasn’t been seen on-screen since 1983. So much has changed since then. Mark Hamill delivers a superb performance, playing a character who is older, and much sadder, but very much remains the Luke with whom half the audience grew up. It is striking to compare how much Han Solo didn’t change between Return of the Jedi and The Force Awakens, and precisely how much Luke has. I can only hope Hamill’s performance here opens up some much-deserved acting opportunities in the future. He is such an underrated performer, and his work in The Last Jedi is pitch-perfect.

To be fair the film does struggle with the structure of its story. At 153 minutes, this the longest Star Wars film to date, and a lot of that length comes from a somewhat sequential approach in the final third. Events onboard Snoke’s flagship are resolved, then onboard the last surviving rebel ship, and finally in a last-ditch battle on the nearby planet Crait. A simple re-working of the story could have easily allowed all three climaxes to occur simultaneously, both shortening the film’s length and making events more suspenseful. As it stands, once the film shifts to Crait there is an unfortunate sense of a James Cameron-style ‘second climax’ that feels rather tiresome. The film also makes some somewhat confusing narrative leaps in its opening scenes: it seems like a day or so has passed at best since the end of The Force Awakens, yet the First Order has gone from overlooked threat to the galaxy to supreme masters of it. Again, a simply rewrite could have fixed this.

These are all irritations. In the long run, it is going to be the film’s exceptional set pieces and its small emotive moments that are remembered. The bombing run on the Dreadnought. Leia’s near-death experience. Luke’s reunions with R2-D2 and Yoda. Hondo’s sacrifice stands out in particular, not just because it is exceptionally well presented but because of what a symbolic moment it turns out to be. By the film’s end, everything is up-ended. Everything seems broken. The rules don’t appear to work any more. That’s a tantalising place to leave audiences for another two years.