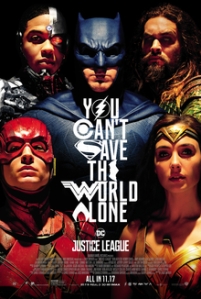 In the aftermath of Superman’s death, the world comes under attack from the alien menace Steppenwolf (Ciaran Hinds). With time running out, Batman (Ben Affleck) and Wonder Woman (Gal Gadot) pool their resources to assemble a group of super-powered individuals to save the planet.

The short version: Justice League is an imperfect but very enjoyable superhero adventure. For lifelong fans of DC Comics – and I will openly raise my hand as one of those – some parts of the film reach the level of an effective love letter. For general audiences it is a relatively light-weight and surprisingly funny science fiction adventure. Heroes do heroic things, villains are villainous, and a lot of things crash, explode or generally run around. It is not as strong as Warner Bros’ recent superhero hit Wonder Woman – who of course features prominently here – but it easily sits in second place among the five DC Extended Universe (DCEU) releases to date.

It has taken Warner Bros a long while but they have finally nailed the signature tone of the DC superheroes. Marvel, against whose films Justice League will inevitably be compared, is excellent at redemption stories and angst-ridden heroes. The Hulk is a tortured victim. Iron Man is an arms manufacturer turned good guy. Black Widow is an ex-assassin. They all have regrets and they generally live troubled, complicated lives. This isn’t a criticism: this is honestly what makes the Marvel characters – and their surrounding universe – what they are, and Marvel Studios have done an exceptional job of translating that tone to the big screen.

Warner Bros has to date fumbled the ball with DC Comics. While Marvel’s origins were in the turbulent 1960s, DC was by-and-large established in the black-and-white morally absolute 1940s. That changes the entire tone of their universe. Superman isn’t a hero because of a teenage tragedy or a dark past; he is a hero because he is innately heroic. Characters like Aquaman, Wonder Woman and the Flash aren’t designed to be tortured, angsty people. Their colour palette is intended to be vivid and bright.

When Warner Bros launched the DCEU it was with the maddeningly bleak Superman origin story Man of Steel, in which thousands died helplessly and Superman saved the day by snapping somebody’s neck. Its sequel Batman v Superman fared somewhat better, and at least established its own distinctive and operatic tone, but it was still awfully dark and vicious. Justice League, which follows a surprisingly direct and strong narrative through-line from those two films, changes course sharply – no doubt in part due to the performance of Patty Jenkins’ excellent and much brighter Wonder Woman adaptation from earlier this year. This is proper brightly coloured, optimistic DC Comics action. The characters are earnest and funny. The stakes are high. The action is energetic and exciting. It feels like the third chapter in a constantly improving long-form story.

It is far from perfect, of course. The film’s villain – a New God named Steppenwolf (find a DC enthusiast to explain him to you) – is an incredibly generic computer-generated alien giant armed with a legion of vampire-like Parademons (they’ll explain). The narrative is a very simple one too, although that does at least provide the film with room to introduce three more superheroes without dragging the runtime out. There is a prevalence of CGI that not only borders on the overwhelming but at times does feel a tiny bit sub-standard.

On the other hand, there are the characters. The Flash (Ezra Miller) is the unexpected stand-out: energetic, distinctive and tremendously funny. A lot of rock-solid humour also comes via Aquaman (Jason Momoa), re-styled from the comic books into a hulking tattooed Polynesian but by God it works. It is also clear as the film progresses that someone among the development team has checked out a solid share of Peter David Aquaman comics and Brave and the Bold cartoon episodes. Cyborg (Ray Fisher), a Teen Titans stalwart who has been pushed hard by DC as a major character in recent years, is surprisingly strong. The screenplay cleverly ties his origin and powers into the film’s core storyline; this helps to introduce the character a bit more carefully, and also gives him an undeniable and important reason to be there at all.

Batman is lightened up considerably, and a few poorly chosen comedy bits aside (you can feel co-writer Joss Whedon’s fingerprints all over them) he works very well. Gal Gadot plays Wonder Woman as if she never stopped shooting her solo film, and remains a dazzling action hero on-screen. The best surprise is Henry Cavill’s performance as Superman. Warner Bros have done a weirdly ham-fisted job of simultaneously hiding his return in the advertising while promoting it in their marketing and merchandise, so I am taking it as read that confirming his return is not a significant spoiler. After two films tied down by miserable scripts and poorly adapted characterisation he finally gets to be an authentic, upbeat and noble Superman at last. As I had always suspected, he is marvellous at it. I desperately hope there is a Man of Steel 2 coming down the line soon.

Hardcore DC fans will be in heaven, with just enough continuity references and character cameos to hint at the sorts of adventures Warner Bros have coming down the line. Fans of older pre-DCEU films will revel in Danny Elfman’s soundtrack, which blends Hans Zimmer’s Wonder Woman theme with John Williams Superman theme and Elfman’s own one for Batman. It is the perfect classic superhero score.

Better superhero films have been made than this, but for the creatively troubled DCEU this is exactly the sort of film that was needed. Wonder Woman kick-started that process of finding the proper DC tone, but Justice League is the statement of purpose. I do not think it is a coincidence that the film’s first scene depicts Superman – before the events of Batman v Superman – talking to a few children about hope. It defines the film. It really feels like it is defining the entire franchise. I went into the film cautiously hoping for something at least watchable, and came out desperate to see Aquaman, and The Flash, and a new Batman film, and more than any of them to see Justice League 2 as soon as Warner Bros can possibly make it. I think future viewers are going to look back on 2017 as the year they finally got it right.