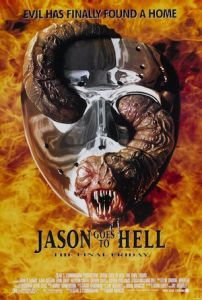 After Jason Voorhees (Kane Hodder) is lured into an FBI trap and violently killed, a coroner is possessed by Jason’s soul and sets out on a fresh murderous rampage. Back in Crystal Lake, Jason’s only surviving relatives are the world’s only chance of destroying him once and for all.

Four years after Paramount Pictures dropped the Friday the 13th movie franchise, original director Sean S. Cunningham returned to produce a ninth instalment for New Line Cinema. It is a perplexing mess. One of the core appeals of the Friday series is watching Jason Voorhees rampage around the place murdering wayward teenagers in comically gruesome ways. Jason Goes to Hell effectively sidelines that entire element: Jason may still be the film’s villain, but as his soul is jumping from one body to the next we do not get to see his iconic hockey-mask persona until the very final scene. That would be okay if the possessed victims were an entertaining replacement. They are not.

The title also feels rather misleading. There is an expectation that the film will somehow show Hell itself, but instead it is just another homicidal day in Crystal Lake. The film begins with a very abrupt and silly ambush by an FBI death squad, inexplicably witnessed from the bushes by an over-the-top bounty hunter named Creighton Duke (Steven Williams). It is Duke who subsequently announces that Jason cannot die, and that the only way to kill him permanently is for one of his previously unmentioned relatives to do the deed. Enter half-sister Diane (Erin Gray) and niece Jessica (Kari Keegan), who can also act as vessels within which Jason may be reborn anew. It is all very out of the blue and difficult to swallow – even within the already nonsensical context of the Friday the 13th saga. There is even a magical dagger with which to stab Jason; none of this is explained in any way, nor do we discover where Duke learned all of this exposition or found the dagger. Whether by laziness or studio-mandated cuts it make little difference. This is just a tediously unwatchable film.

Despite Jessica being set up very much as the traditional ‘final girl’, the film actually spends the bulk of its running time following Jessica’s ex-husband Steven Freeman (John D. LeMay) instead. LeMay’s performance is competent but unexceptional, due largely to the relatively banal character with which he has been saddled. He presents a stark contrast to Steven Williams’ performance as Duke, which suffers a surfeit of personality and flair in a movie that does not really have much of either.

There is a trick to sequels: a good sequel needs to bring enough of the original work to comfort the audience, and bring enough new material to deliver a fresh and satisfying experience. Jason Goes to Hell absolutely fails on the first count – this simply does not feel like a Friday the 13th film in any particular respect – and it does a disastrous job of the second. It is not just tonally off-kilter, it is a terribly made film. The plot is a nonsense, the iconography and format is all-but abandoned, and a last-second hook into an eleventh film (so much for The Final Friday) comes so out of left field that it elicits more confusion than excitement. Jason Takes Manhattan was a hugely underwhelming Friday sequel, but at least it felt like part of the series. Jason Goes to Hell simply feels like an mistake from floor to ceiling.