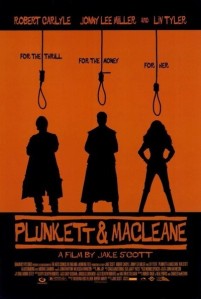 It is the year 1748. Disgraced army captain James Macleane (Jonny Lee Miller) is sent to a debtor’s prison, but escapes after an unexpected encounter with a pair of highwaymen and their government-appointed pursuers. Once free, Macleane slips into partnership with one of the criminals – Will Plunkett (Robert Carlyle) – and together they hit upon the perfect criminal enterprise: using Macleane’s upper class connections to gather intelligence before robbing his rich fellows at gunpoint.

Plunkett & Macleane, the 1999 debut feature by British director Jake Scott, is a slightly difficult film to categorise. It is, in part, an action film – although ultimately it does not have enough action to really qualify it in that genre. The film is regularly laugh-out-loud funny, but does not quite feel like it should be considered a comedy. It also gets rather serious and bleak from time to time, but all of those funny moments prevent it from being a proper drama. Instead the film sits delightfully between all three; it is a fast-paced, idiosyncratic story about two unlikely friends and their careers as highwaymen in the mid-18th century.

It is a tremendous debut feature for Jake Scott. At the time I was desperately keen to see more from him, but the only other narrative feature he has ever directed is the rather underwhelming 2010 drama Welcome to the Rileys. In Plunkett and Macleane he demonstrates a strong visual eye, cleverly adapting to the film’s comparatively low budget to create a sense of 18th century England without slavishly sticking to historical accuracy in terms of costume, architecture and the like. Fidelity to the facts are not the film’s concern; for one thing the lives of the real-life Plunkett and Macleane barely resembled that of their film counterparts at all. This is absolutely a film that favours style over substance. It is a choice that saw the film get hammered pretty viciously by critics of the time, bemoaning its creative choices while failing to acknowledge that they are intentional and well-considered.

The truth is there is no problem with favouring style over substance. Some of the best films ever made are almost bereft of visual flair, but are celebrated because of their deep characterisation or thoughtful narratives. It is absolutely fair – indeed I would argue necessary – to respect films from the other end of the spectrum: relatively simple characters and storylines developed purely to showcase attention-grabbing visual and aural aesthetics. Plunkett and Macleane is a wonderfully entertaining slice of late-1990s stylistic excess. Craig Armstrong’s electronica-infused score is marvellous, walking a narrow tightrope between traditional orchestral arrangements and dance music, and despite being one of his earliest produced scores it still stands up today as one of his all-time best. The electronic elements of the score work well with the film’s attempts to recontextualise its story in late 20th century terms. English fops act like modern-day football hooligans. Highwaymen are treated like rock stars; their wanted posters pinned on the walls of teenage girls’ bedrooms.

The casting of Robert Carlyle and Jonny Lee Miller clearly aims to attract the Trainspotting market, even though both actors play fairly different roles. Miller is great as the self-obsessed, relatively cowardly Macleane, whereas Carlyle plays a much more serious and brooding figure as Plunkett. Their interplay works brilliantly. There is a relaxed familiarity between them that makes them tremendously enjoyable to watch. They also benefit from a very strong supporting cast including Liv Tyler, Michael Gambon, Alan Cumming and a particularly strong Ken Stott. Stott is one of those actors who is weirdly gifted at playing truly repellent villains. Immediately prior to playing the vicious Mr Chance here, Stott played a vengeful and obsessed police detective in Anthony Neilson’s harrowing The Debt Collector. Together they form a powerfully unpleasant one-two punch.

The sharp contrasts in Plunkett and Macleane are, for me, what makes the film work so well. Some of the comedy gets remarkably broad. Some of the violence gets genuinely horrific. The film bounces back and forth between the two with an impressive dexterity. It has been almost 20 years since the film was released, but it still shines. Jake Scott may not have advanced his career in motion pictures like I had hoped he would, but he did give us this one hugely underrated gem – for which I remain very grateful indeed.