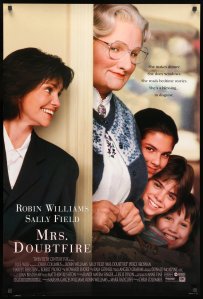 When unemployed voice artist Daniel Hillard (Robin Williams) experiences a divorce from his now ex-wife Miranda (Sally Field), he also loses custody of his three children. Desperate to continue spending time with them, he has his make-up artist brother transform him into elderly English nanny “Mrs Doubtfire” and assumes the role of Miranda’s housekeeper – all the time with Miranda unaware of his true identity.

Mrs Doubtfire was a huge commercial success back in 1993; so huge, in fact, that only Jurassic Park grossed more money that year. It seems a perennial favourite among Robin Williams fans, and shortly before his untimely death there was even discussion of finally making a sequel.

It is also jaw-droppingly repellent. Intentionally or otherwise, it presents a story in which an unemployed and irresponsible father disguises himself inside his ex-wife’s home to spend unsupervised time with his children. Over the course of the film he sits odiously and listens to Miranda’s private thoughts. He is actively hostile to her new boyfriend to the point of almost murdering him. Mrs Doubtfire may still be widely loved, but it is a toxic story about a terrible person who not only behaves in deeply illegal fashions but is actively forgiven and rewarded by film’s end. In it’s worst moments it is an enthused proponent of the men’s rights movement, that aggressively posits fathers – even emotionally abusive ones as Williams plays here – are somehow let down by a misandrist legal system and corrupt judges. Throw in some casual homophobia and transphobia, and you have a remarkably awful two hours at the movies. If you kept the script and directed it straight, it would be a deeply creepy thriller.

The cast are actually very good, and put a lot of strong work into their characters. Williams does what Williams does in comedies – fill his part with a spontaneous joking schtick – but Sally Field gives Miranda depth and heart, and despite the screenplays attempts to force the audience onto Daniel’s side Field is regularly successful at pulling them back. Pierce Brosnan plays businessman and love interest Stuart Dunmeyer in a fluid and appealing fashion, revealing multiple layers of insight as the film goes on. The film’s child stars are all rock-solid – particularly young Mara Wilson, who would go on to star in Danny DeVito’s Matilda (1996). It is a shame that they all put in such strong work, since the film they are servicing is not worth the effort.

Twice the film resorts to one of the most tedious cliches of the comedy genre: the old routine of one character trying to be in two places at once without anybody suspecting. It is tedious both times. There are some genuine laughs littered through the film, but they are overwhelmingly outnumbered.

Director Chris Columbus is a fairly patchy filmmaker, capable of directing films in a functional manner, but rarely impressively. Many of his other films are simply a little ordinary or dull. It has taken real effort to make Mrs Doubtfire as deeply unlikeable as it is. Anybody tempted by nostalgia should stay away to preserve the illusion that this was once so well-liked. Anybody new to the film should simply stay away.