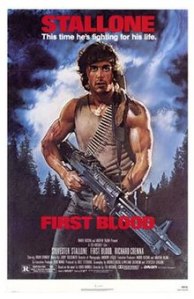 Vietnam veteran John Rambo (Sylvester Stallone) is passing through the Washington state town of Hope when he is picked up and harassed by local sheriff Will Teasle (Brian Dennehy). Refusing to back down at Teasle’s threats, he finds himself arrested for vagrancy and resisting arrest. When Teasle’s deputies further intimidate and assault him, Rambo snaps and fights his way out of the police station. Retreating the mountains above the town, he becomes the focus of a spiraling war against the state police.

The character of John Rambo has mutated considerably since 1982. Thanks to the patriotic and often-times near-jingoistic sequels by George P. Cosmatos and Peter MacDonald, the character is now more regularly remembered as the exact opposite of what he was in 1982. The original Rambo is a traumatized victim, tortured in Vietnam and then sent back to a USA that protested and despised both him and other veterans. While his first film outing – based on the 1972 David Morrell novel – contains plenty of action, it occurs with a polar opposite purpose. First Blood condemns the manner in which mainstream America abandoned its veterans. It is an action film with a political agenda.

The film ups the ante methodically. In begins with one man walking down the road in the hope of connecting with an old friend. When he’s first hassled by Teasle it is an unpleasant frustration. Then he is arrested and badly mistreated by three police officers. When he snaps and goes on the run, events take a more serious turn. Then an officer accidentally dies, shots are fired, and the crisis simply rises higher and higher until Rambo is shooting machine guns on the street and blowing up entire buildings. If the film started where it ended it would feel cheap and over-the-top. Since Kotcheff – and screenwriters Michael Kozoll, William Sackheim and Sylvester Stallone – employ a gradual rise, there is never point where the viewer need question it. Given the comparative carnage of its sequels, First Blood remains a breath of fresh air.

Brian Dennehy is perfectly cast as Teasle; he has always excelled at playing odious authority figures, and here he finds perhaps his all-time best character. He is so engaging here because Teasle is never quite a fully-formed villain. We see him flicker with doubt and regret throughout the film, and while he is certainly at fault for the first wrong levelled at Rambo he is absolutely not the only person to blame. In one brilliantly performed scene, and with Rambo temporarily assumed dead, he shares a drink with Rambo’s former commander Colonel Trautman (Richard Crenna). The scene is not necessary to the film’s plot, but it rounds Teasle off and makes him both fallible and human. As for Crenna, he plays Trautman with a quiet authority and firm dignity. He achieves marvels with just a flicker of the eye, or a well-placed frown.

As John Rambo, Stallone should have cemented a reputation as an A-class Hollywood actor. He is a very different character to Stallone’s most famous creation Rocky Balboa, and he instinctively feels it. When the character needs to be hard, Stallone gets frankly terrifying. When he needs to be desperate, we see it all over his face. Pretty much the hardest thing for an actor to do on screen is perform without another actor to work against; Stallone is performing solo for most of the film, and is exceptional in doing so. It remains a tragedy that a string of increasingly stereotyped sequels and commercial action vehicles pulled him away from the craft of acting for so long. He was not as good as he was here again until Copland in 1997.

It must be noted, without openly spoiling it, that First Blood ends in the most powerful and unexpected of ways – and with one of the most effective pieces of acting in Stallone’s career. Most critics at the time could not see past the genre conventions and Stallone’s slightly slurred vocal delivery (the result of lifelong facial paralysis). It is their loss: 1982 was a great year for American film, and First Blood one of its strongest films.